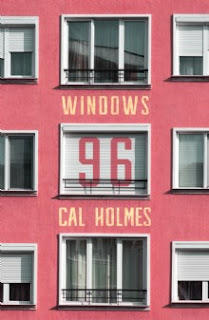 In Windows 96 author Cal Holmes takes her readers back to the year 1996.

We meet Alex. Alex is a teenage boy who spends his days dormant in the den in the garage, smoking diope and dreaming of the time when he will be able to cast all this aside and travel the world.

But there's a bit of a problem, really. Lack of money = no travelling anywhere, least of all the world!

Knocking on doors with the coldest of cold canvasing, daytimes spent in the boozer, nights out in somewhat less salubrious pubs.

There was Brigette, beautiful, but cool and aloof, Brigette, in the Baston telesales department, he fancied her, but she wasn't in the slightest bit interested. Or was she?

Pretty soon Alex is finding out that things at home between his parents weren't all that he had thought they were, his finances are running on empty and he finds himself spiralling into a life of crime whilst sharing a rundown flat with his double glazing sales colleagues.

Can he get out of the rat run of double glazing sales, too many visits to pubs and nightclubs and the grotty shared flat?

This is a wry and amusing look back at a not that distant piece of our history and it's clear that the author has seen the world of double glazing sales from the seedy inside.