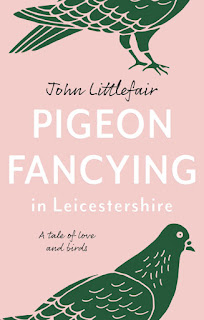 Pigeon Fancying in Leicestershire is a debut novel from John Littlefair.

Lanfranco DeLuca is an avid pigeon racer. But unfortunately his top stud bird, recently bought for an exorbitant fee, just isn't able to perform is duties as a stud.

So, what's to do for DeLuca? He believes that desperate measures are required to regain his standing in the pigeon world and to regain some of his money.

But he wouldn't stoop to some pigeon kidnapping. Would he?

The matter becomes more complicated when Jon Landseer, fed up of life in London, can't really decide what he wants out of two options. A career in Briton as a struggling journalist supported by his perhaps overly ambitious partner, Louse. Or a life of rural bliss on his aunt's somewhat tumbedown smallholding in Leicestershire.

To add to the mess of complications Joe falls for a scientist called Alice who is working in the city of Leicester on research into the condition Pigeon Fancier's Lung. Unfortunately Alice is embroiled in DeLuca's pigeon scam.

They try to resolve their own issues with their suddenly more complicated lives and also to solve the mystery of the male pigeon who couldn't perform.

Will they find a cure for Pigeon Fancier's Lung? Will the stud bird perform again? Will anyone find true love? Will Deluca get his just deserts?