The Isle of Wight's Missing Chapter 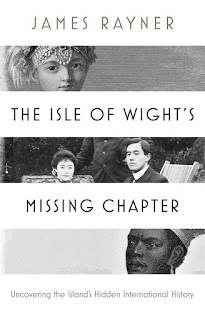 Islander James Rayner has undertaken some very detailed research and he has brought together hundreds of sources, for the first time, and he tells the hidden (until now) international history of the island.

Through the years the island has played host to many international luminaries such as Mahatma Gandhi, King Cetshwayo the King of the Zulu nation, also Queen Emma of another island, Hawaii.

The island has also been home to a top Jamaican model, a cricketer from Sri Lanka and a famouus pioneering Doctor from India.

His research indicates that The Isle of Wight has been home to people of mixed races for at least the past two centuries and he points out why the island has an important place the black history.

He also looks at modern day international links including a poet from Iran and an author who hails from Poland.

The island has also been visited by many famous musicians including Miles Davies, Jimi Hendrix and Stevie Wonder.

There were also a teacher and philosopher from Cameroon called Bernard Nsokika Fonlon, and a Berber who was described as the father of Berber nationalism, Mohand Aarav Bessaoud spent the last years of his life as a political refugee after the French government decided to expel him in 1978.

It's not a long book but it is very readable and is packed with very well researched facts about some of the fascinating people who came to live on The Isle of Wight.

It's published by The Book Guild at £9.99 and if you are interested in black British history, this book is a must have, in my opinion.