Keeping Them Off The Streets 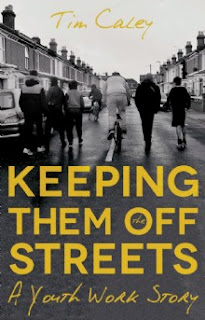 Keeping Them Off The Streets is the autobiography of youth worker Tim Caley.

It's not merely the story of Tim's life. He has skilfully intertwined his personal memoir with a social history and an examination of the constantly moving and changing politics and policies in the field of yout work and of you people over the past 40 years. And how these policies impacted at the grassroots level.

Tim has eschewed the formal and academic way of looking at the issues and events. Instead he has chosen to provide a warm, human commentary based on his own experiences.

Although it contains amusing anecdotes and is written in a humorous fashion, it is intended to contain message and information that are vitally relevant and important messages about the continuing needs of young people as we get deeper and deeper into the 21st Century.

Tim started as a fresh, young and keen youth worker of 24 years age in 1972 in a tough area in Sheffield. He was pleasantly surprised that he had the support of the local police inspector, which wasn't always the case.

He points out that, in the 1970s, youth work was viewed through the lens of Marxist theories, of class, race and gender.

Although he had two degrees he became a teacher and later a youth worker with no formal qualifications in either teaching or youth work, which, he readily admits, did make him feel like something of a fraud when he compared himself to colleagues who did have the relevant qualifications.

He relates a very telling anecdote. A group of youth workers, it is reported, had a meeting with Edward Heath, the then Prime Minister.

They were lobbying him on benefits of youth work. They spent a considerable amount of time berating him on what they perceived as the lack of recognition, vale and their credibility.

Heath had listened to them, with patience, and eventually asked them to please explain what youth work achieved?

There was a period of pregnant silence and the youth workers found it hard to agree or to provide any coherent answers.

Tim's book is an interest study in how he and the youths he worked with grew and developed, how he worked out strategies to deal with truants (his policy was to keep them busy and not phone the Educational Welfare Officer) how to deal with officialdom, and how to deal with the ever-shifting rules and regulations that government (local and national) kept imposing on both youth workers and youths. Including the OFSTED regimen.

If you are interested in the history of youth work and youth culture, this book is for you.