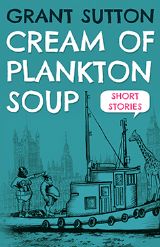 When I began to read it I felt something akin to an electric (or was that an eclectic?) current jolting its way through my mind and my body.

On the first page of the first story the reader meets Pipa, a young woman who has given birth to twins. Fathered by a vegetable of some kind, though she declines to say which type of vegetable.

The twins are called Pierre and Melone.

When the twins -who are being wheeled around by Pippa in a misappropriated supermarket trolley- begin to cry, Pippa has to soothe them by unhooking a stepladder from the trolley and playing a rather unwieldy piano accordion whilst sat atop the stepladder. For about an hour, during which time she plays random notes.

The protagonist then begins to offer Pippa a wide range of tendentious advice before he is subjected to a foul mouthed tirade about the suitability of vegetables and, indeed, all men to be good parents.

Another story touches on the problems faced by cliff faces and the attentions of confused woodpeckers, and is a fairly ordinary, yet well-paced and well told tale of regal woes as a King awaits an assassin on the top of a cliff, when the story takes a sudden and unexpected change in direction that is a genuinely WTF?? moment. Well, at least for the reader, the King -presumably- knew what was happening all along, even though it had cost him 100 brave warriors.

The remainder of the stories consists of an absolutely delicious gallimaufry of brobdingnagian proportions, including 43 bags of frozen peas, the fact that, after all, gravity does not exist, what not to do with a photocopier during a board meeting, the concepts of natural and supernatural selection and the sudden appearance of a kidnap ensemble made up of militant clowns. And then it gets really weird!

The book is enlivened, and genuinely so, by reader's comments. How could there be reader's comments in a printed book? That's an interesting question which will be answered by visiting www.planktonsoup.co.uk, after you purchase and read the book, of course.

There are also some wonderfully evocative illustrations by Ayesha Drew.

The book is published by Matador at £7.99 and can be ordered here https://goo.gl/wdCFDG.