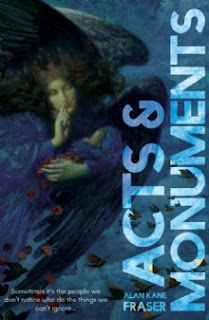 Barry Todd, the protagonist of Acts & Monuments written by Alan Kane Fraser, is a good guy. How does he know this? Because everyone tells him so!

He is a hardworking member of the team at Monument Housing Association as he strives to ensure the the poor and vulnerable are provided with a safe and decent place to live.

Everyone expected Barry to be promoted to the position of Director at Monument Housing Association, including Barry. But, instead, the promotion is given to the insufferable Langley who had been drafted in from the world of commerce to bring in 'private sector disciplines' to the charity.

There were already issues between Langley and Barry, and the fact that Langley had been promoted to Director made the entire situation worse. And part of what Langley had done (firing Barry's wife) had meant that finances at the Todd household were tighter than they needed to be.

Barry had always been good, had been a good person and a good, loyal employee of the Housing Association, but he was now beginning to doubt that "being good" was good enough. At least for Barry.

And then, by apparent serendipity, an opportunity falls into Barry's lap. He finds himself in the situation where he would be able to steal £50,000 of the Monument Housing Association's money in such a way that it would be impossible to trace the theft back to him.

A tenant, Iulia Niolescu, comes to Barry. She is desperate for assistance and he realises that he has been presented with an ideal opportunity to use some of this money to do somebody some good.

But he finds that the situation begins to spiral dangerously out of control nd he is forced to take desperate measures to stop his deceptions and the theft of the money from being revealed.

But then things really began to fall to pieces. And at the end of the novel there's a very disturbing twist.

This is an amazingly well-written novel and although a work of fiction the author has used to very good advantage their intimate knowledge of the world of Housing Associations.

The book is published by Matador and costs £8.99.

(Incidentally it was with interest that I realised that I have previously seen an example of the work of Alan Kane Fraser as I saw his award-winning play, Random Acts of Malice being performed at the Belfrey (sic) Theatre in Wellington, Shropshire, as it was the winning play in the inaugural Derek Lomas Award for Best News Play at the Wellington Drama Festival.)

(Note: The image used is the cover illustration of the book and is E R Hughes' Night with her train of stars and her great gift of sleep (c) Birmingham Museums Trust.)
Posted by Martin S at 18:45