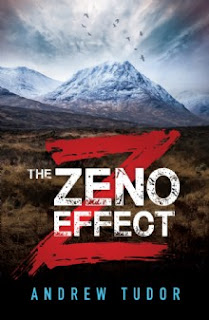 In The Zeno Effect a new science fiction from from Andrew Tudor it's the year 2029 and there is no more United Kingdom.

England and Scotland are neighbours, of course, but the relationship is a little bit hostile so to speak.

Unchecked global population growth is causing even more damage to the environment.

A scientist who has become disillusioned with life and with humanity in general takes the decision to release a genetically engineered virus into the wild, which causes a rampant disease to rapidly spread round the world, killing millions of people and causing society to collapse under the horrors that this disease has unleashed.

The Scottish government's Scientific Liaison Officer, Alison MacGregor, was one of the first people to be given leaked data about the Zeno virus.

With Irene, her best friends' mother who is a Senior Scientific Adviser to the government in England and Jonathan Hart, the Director of England's Domestic Security Division, both disturbed by their government's attempts to cover up the fact that the ensuing pandemic cannot be stopped by vaccinations, and a young journalist called Julie Fenwick, they attempt to come to grips with a violent apocalyptic religious cult, maundering Border Reivers and a rising military dictatorship they must work together to find a place of safety.

But is there such a safe place? Can they find it?

I believe this book will become a classic science fiction novel. And I would not be surprised to see it turned into a film.