The Pong of Power 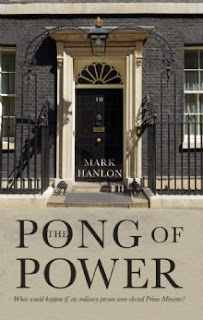 The Pong of Power is a political comedy from Mark Hanlon, a history graduate, a former city of London lawyer and adviser to banks and shareholders on "large-scale infrastructure projects" for the past couple of decades. Oh, yes. He's also a qualified Reki Healer who lives in South London.

In The Pong of Power we learn what might happen if an apparently ordinary person were to somehow take control of the levers of power and become or Prime Minister.

An Old Lady is, like many of us, absolutely and utterly fed up with how things are in this country.

In a shopping centre she gave a full bore rant from atop of her mobility scooter, pledging to restore "Old Lady Values" to political and public life in the UK.

But the Old Lady is not quite what you might think. Or what anyone might think, for that matter. There's the age of this partner in a firm of solicitors. Exactly how old is she, really? 157, perhaps? And then there's her extraordinary habit of dying. At least three times in one week. Well, that's a bit much, isn't it?

But then on the way back to the meth den in Catford where she lived, (what?A Catford meth den? Yes, things are getting a bit complicated, but please bear with us) she is abused by a variety of thugs, nutters and thugish nutters and she snaps, leaps upon her mobility scooter and gives a stirring speech about how life had been much better when she had been a girl back in the 1870s.

However, the entirety of her address had been broadcast not only all over the UK, but also worldwide. Even North Korea had taken notice.

She ran for parliament and won. And then, then she became Prime Minister. But all wasn't quite what it seemed. Dark and somewhat evil forces had aided and abetted her rise to power and as soon as she is in power, just as quickly they work hard to destroy her.

Her dreams become nightmares as the idea of being Prime Minister turn to ashes. She faces a whole array of devastating crises, the likes of which have never before faced a British Prime Minister.

The Russian invasion plans that weren't quite what they seemed, and there were crystals that glowed and there was the little matter of the problems with President Dump, you see?

But a peace conference in a St Ives tea shop? It really wasn't mean to be called The Old Rectum Tea Shop. That was a mistake by the owners.

Plus there was the rather unpleasant business with the now hopefully deceased Satanic Yoga teacher and his modified bubonic plague.

But the Old Lady could and would save the day. Well, she would. Wouldn't she? But what did the psychic know about the Old Lady? And why did she warn her to "beware of the teapot?"

This book is either outrageously funny, or funnily outrageous. Dear reader, you must be the judge of that after you fork out your £9.99 for your own personal copy.

It's published by Matador.