Medicine, Justice and the Bubblegum Factory 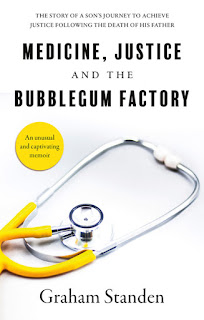 Medicine, Justice and the Bubblegum Factory is an amazing memoir.

Graham Standen was a working-class youngster from Romford, in Essex.

He had a troubled childhood blighted by maternal illness, time spent in a children's home, fostering with relatives and he failed his 11 Plus.

However, Graham was made of stern stuff and, against all the odds, he was able, by dint of hard work, he was able to qualify as a medical Doctor.

His medical qualification was put to good use because he was able to correct a terrible miscarriage of justice involing his late father who, along with his two brothers, died from mesothelioma aftyer they worked with asbestos as boiler coverers before the war.

When Graham's father developed disseminated cancer, there were very good grounds for suspecting that exposure to asbestos was the cause. But the diagnosis of mesothelioma was not recognised at the postmortem. Much to the horror of his family.

After a decade spent as a cancer and leukaemia specialist Graham, with the assistance of a colleague who was a pathologist, the cause of Graham's father's death was looked at anew and the correct diagnosis was achieved.

Graham points out that the story of his father highlights the corporate deceit and indifference shown by the industry toward the health of their workers.

It's a very moving account of the struggle of Graham and his family in their attempt to finally gain justice for his father.