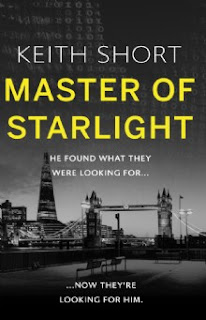 In Master of Starlight we meet the protagonist Leon Dabrowski. He is not merely a physicist, he is an exceptionally gifted physicist, a genius, in fact.

He realises that he has made an utterly astounding discover at the nuclear research centre where he works. He knows that, if his work is applied, that the world is on the very point of obtaining unlimited energy for everyone for the foreseeable future.

He and his colleagues are expecting awards, accolades and praise for the work that they have achieved.

But none of this happens and they find themselves thrust into a dark and alien world of industrial espionage. In fact they are treated almost as if they were a class of criminal rather than as highly respected scientists.

Then his fiancee, a gifted mathematician, Magda Tomala is kidnapped and finds herself held a captive in a sexual fantasy complex that is hidden deep underground.

Leon abandons his work to help a special unit of the Polish police to smash an international sex trafficking gang.

He goes undercover and finds himself working covertly to spy on an emerging cult society in London, researching the truth aouit a highly organised world in which prostitutes are supplied for the wealthy.

By now the tables are turned on Leon. No longer the hunter he is now the hunted and everyone wants to know where Leon is. An oligarch who he is in the employ of, his work colleagues and the madam of a brothel with links to the Russian Mafiya. Some of the people who are seeking him are very dangerous people in deed. But there's more to the situation than meets they eye. For one of the hunters holds a secret about Leon's early life. A secret that is potentially shocking.

But can Leon prevail against them all and perhaps even learn to use what he learns to his own advantage?

A retired nuclear engineer, this is Keith Short's first novel and it's published by Matador at a very reasonable £7.99.

It's probably destined to be in the holiday luggage and read on beaches all over the world this summer.
Posted by Martin S at 00:02