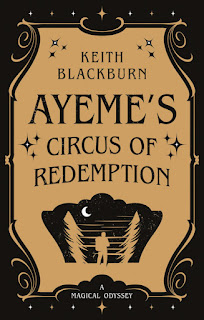 In Ayeme's Circus of Redemption, a new novel from novelist Keith Blackburn, we meet Arthur. Arthur used to be a teacher at a very good grammar school. But that was  long time ago, before alcohol had taken its toll on him.

After an unfortunate meeting with a white delivery van he awakes in a hospital bed. However, it's no ordinary hospital, this one has fireplaces in the rooms and Arthur (registered for some reason as Ayeme) manages to escape from the hospital ward by the simple means of going through the fireplace.

He is in a moonlit garden, which is imbued with peace. On the other side of the garden he espies a woman who is dressed in black who is conversing with a man who is wearing  top hat and tails.

He realised that they are planning a funeral. In some way that he cannot define, Ayeme feels a connection of some sort with the woman, so he attaches himself to the procession which finally reaches a church which is in the middle of a wood.

And then things begin to get really interesting as he sets off on an odyssey of a journey, he meets and interacts with a variety of rather interesting and intriguing characters, as he attempts with varying degrees of success, to try to work out what is happening and what is going on.

And what, exactly, is the circus of redemption? Who is it attempting to redeem?

It's a stunningly original book, sadly it is the last book written by Keith Blackburn who passed away in October 2018.