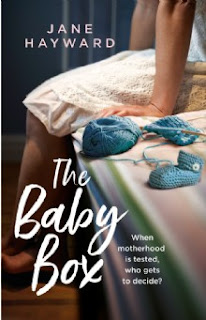 The Baby Box is a book by Jane Hayward that is a frank and very open memoir about her tim3e in a mother and baby home.

It's 50 years after these incidents.

Her mother wanted to have an obedient, compliant daughter who would somehow magically skip right over the teenage years and jump from being an innocent child to a virgin bride. She points out that she realised that she and her mother were at war.

Jane moved to London and found herself living the dream of that time. New, interesting friends and exciting encounters.

She defied the rules set out for her by her mother but unfortunately she found herself pregnant and facing the anger of her mother who felt shamed and disgraced by what Jane had done.

And as a result Jane found herself in a mother and baby home, banished there by her "shamed" mother.

Adoption was the usual outcome of such a familial banishment, but Jane was made of sterner stuff and even the violence of her mother makes her more determined to do what is right for her and her baby and the father, Nick.

However, not all stories have happy endings.

This is a remarkably honest and courageous book