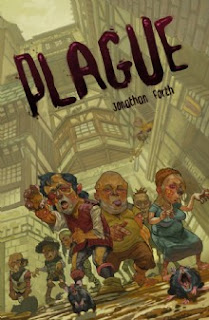 Plague is an hilarious look at medieval history, written by Jonathan Forth.

Apparently there needs to be a war between England and France. Who says so? The Pope. Why? He believes that peace has prevailed for far too long.

People have become lax, which is, the Pope believes, a result of living a life that is far too peaceful. If there were a war between England and France, goes his Papal reasoning, people who become so scared that they'd return to church services and, as a consequence of this, money would be put on the collection plates. After all, when the plate is passed round the church, who wants to be the odd one out by not making a 'voluntary' donation?

He has a very daring and gorgeous assassin who is primed to kill Edward, King of England. Who must die a painful and horrible death just at the time when King Philipe of France is visiting England.

However, much to the Pope's chagrin, the plague has already reached Europe and it's now a bit of a race to see who kills King Edward: The plague or the assassin.

Sir Walter, vassal to the King, is charged with sorting the situation out. But what, exactly, is causing the plague? Strongly scented French cheeses? Is it fornication as the Church pontificates? The fireball that appeared in the sky? Or something else?

But as an interesting aside, what would happen if Death and the Plague were to get together and work in harmony?

And what exactly would be the reward of the Pope?

This book is a very amusing romp through some of the lesser known avenues of Medieval history.