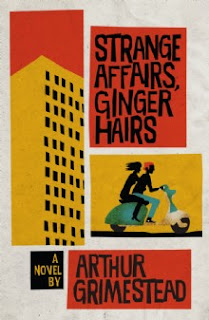 In Strange Affairs, Ginger Hairs, a novel written by Arthur Grimestead, it's Hull, its 1998 and Ginger is 18, he's also broke, unemployed and single.

His parents seem to be indifferent to him and he wants to get away from them and also get himself a young lady.

His life is boring to an excruciating degree.

But then into Ginger's life comes a gold ring. And suddenly, everything changes for Ginger. But not necessarily in a good way.

He finds himself betrayed by the person who was supposed to be his best friend, caught up in a world of violence and crime and fleeing from some local bad boys who want to get what they view as their property back.

And the he meets ms Fish, And then he and ms Fish end up kidnapping Syd by clobbering him with a gun and shoving him in the boot of the car.

And then things began to get rather more complex and a good deal nastier that Ginger could ever have bargained for.

Can Ginger avoid the criminals? Can he evade the police?

And what might the future hold for Ginger, ms Fish, his parents and Syd? Might some of them have no future to speak of?

This is an exciting and quirky novel and you will find the music to accompany it at https://arthurgrimestead.com/.