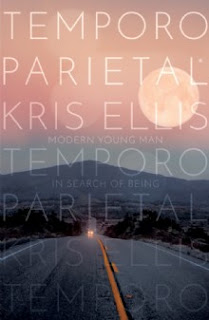 Temporoparietal is a new novel from Kris Ellis.

It takes a look at the life and times of the protagonist, a young man called Matt Pearce.

Matt has OCD, is something of an educational low achiever, a move buff and a fan of the works of Jack Kerouac.

He finds himself in a bit of a bind. A relationship with an abused teen goes south, north, east and west and in a bit of a panicked existential crisis Matt leave not only his home but also his entire country.

He flees to the USA and decides to take a Greyhound bus trip across the USA.

Why does he do this? To escape from his abused teen called S? In part. But he also feels a desire to make a sort of a pilgrimage to the last resting place of his hero, Jack Kerouac.

Kris is a former Youth Counsellor and bases his novel on "real young people of today."

It's a heady mixture of old school head trips and modern cyber chic.