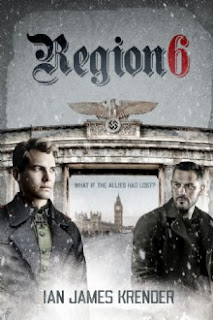 Region 6 is a terrifying novel from Ian Krender  about an alternative dystopian thriller that examines what life would have been like in Britain if the Nazis had won World War 2.

It's set between the years 1983 to 1994. Britain is no longer Britain, it was renamed Region 6 by the Nazi rulers. The populace is divided into two groups, those who are fortunate, those who are not.

The story involves two repressed gay men, Thomas, who is of lower class due to his Jewish heritage and Stephen who is a reasonably wealthy man who has just joined the Gestapo.

His first mission for the Gestapo is to seduce Thomas, as the Gestapo believe he is a part of the resistance.

What will happen? Will Stephen stay loyal to the Nazi regimen and murder Thomas as ordered? Or will he take another path?

Will he side with the government or work to destroy and overthrow it?

It's a well written novel that is chilling because it's very plausible.