The Many Looks of Tara 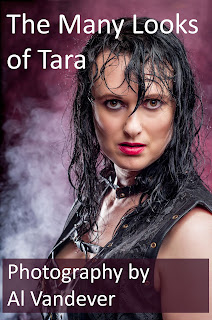 At the young age of four, Tara already knew what she wanted to be when she grew up.

Inspired by the glamorous actresses of the forties and fifties, she practised posing in front of a mirror until she landed her first professional modelling job at the age of sixteen.

That was the launching pad for a decades-long career that would open a world of glamour and answer the dreams of a four-year-old girl.

It wasn’t quite that clear cut for Alan.

From the time he could hold a pencil, he dreamed of being a commercial artist. It was his one and only goal.

Then his parents bought him a camera one Christmas and he soon developed a love of photography.

As his talent developed in each media, Alan was unsure which career path he would take until fate stepped in.

While still in high school, his photography work was noticed by a leading newspaper in the area and he was offered a job after graduation. Al credits the ten years he worked as a press photographer as being the best on-the-job training he could have received.

After leaving the paper, Al went on to form his own photography company.

So - what happens when the lovely model, Tara, met award-winning photographer, Alan Vandever?

See for yourself with “The Many Looks of Tara.” A collaboration of over 30 photos, shot in a variety of indoor and outdoor locations, using different lighting and shooting techniques.

“The Many Looks of Tara,” is available at www.Amazon.com as an e-book or paperback.
Posted by Martin S at 09:16 No comments: 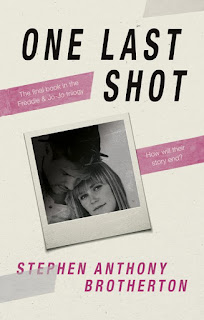 One Last Shot is a continuation of the journey of Freddie and Jo-Jo. In his semi-autobiographical romantic novel, Stephen Anthony Brotherton asks an interesting question. Can first love ever be re-ignited? Should it be?

It's the conclusion of the trilogy of Freddie and Jo-Jo, using flashbacks to show how they met and fell in love in their teenage years, what happened to make them drift away from each other, what their lives were like in the intervening years and what transpired when, three decades later, they met, again.

You'll remember that at the culmination of the second book, An Extra Shot, Jo-Jo had revealed to Freddie her terrible secret. He was sent into a state of shock and confusion, leaving him feeling hurt and vulnerable. This has left Jo-Jo worried, because it's obvious to her that he hasn't taken it well.

So, how will Freddie react? What will Jo-Jo do? How will it all work out? Will they find again what they once had, but lost?

It's a fitting conclusion to the trilogy.

In this debut novel, Robert's Obsession from author Brian Threlfall, we meet the protagonist, Robert Ormondson.

Things are not going very well for Robert. At one time he was the happily married owner of an Arts and Adult Education Centre.

Unfortunately both his Art Centre (situated on a hill, overlooking the coast) and his marriage to Mary, who is in charge of catering at the centre, are failing.

He develops an infatuation for Jane, a part time worker at the centre and he allows himself to be convinced that his ambitions for the centre can be revived if he can kindle a relationship with her.

However, this already complex situation becomes even more complicated when a former love interest returns to the scene.

A local millionaire is sympathetic to the plight of the centre and offers financial help, but, sadly, within days of making his offer, he dies.

His widow believes in Mary and wants to help her open up a proper restaurant within the arts centre, meaning that Mary becomes keen on revitalising their marriage.

What will happen? What were the links to a similar story involving an ancestor of Robert in the 19th century?