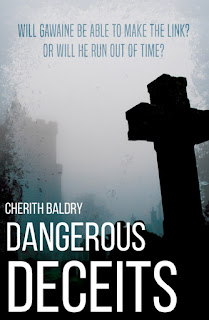 In Dangerous Deceits we are taken to the North Downs. A vicar has vanished from his vestry, mere moments before he was due to take the Sunday Morning Service.

Eventually the corpse of Thomas Coates, former incumbent of St Paul's, Ellingwood, is discovered on the North Downs.

And it falls on to our hapless and unwilling amateur sleuth, Gwaine, along with his companions, to find out who might have had motive an opportunity to murder the late vicar.

But who could it have been? Frank Reed, angry because he felt had slighted his wife over a doctrinal matter? John Bretton who had his own problems with the vicar? Or What about a pair of adulterers?

And what of the church treasurer who somehow appears to have more money than he should have?

Or might the murderer have been closer to home, a member of the victims own family?

But the situation is made even more cloudy by the suicide of the local doctor's receptionist. Might her death be linked to the murder?

And how is it that the pectoral cross of the vicar is missing? What is the significance? And could there be more people involved in the murder?

Cherith Baldry has a swift, no nonsense style and you'll be wondering who the murderer is and if there are characters in the novel who might know more than they are letting on.

Gwaine is drawn with such precision and clarity that it would be utterly impossible for women not to want to send him scented notes and for men to want to take him out for a pint.

If you are a fan of good mystery novels, or if you have someone in your life who is, you really do need to buy this book.