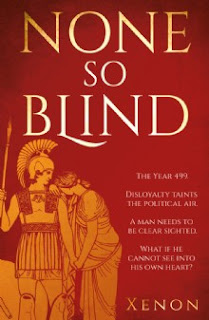 It's the year 499 and None So Blind a new novel from Xenon. Set in the Gea, a country that is united in an ethnic, linguistic and cultural sense, but is disunited by politics

There are 15 states that are independent of each other, and the history of Gea has been a long story of warfare between them. And also the nations that surround Gea.

But for the preceding 25 years Troia has brought the independent states into an Empire that is quite formidable.

But the current Emperor is not very good at being an Emperor. He is weak, inept and not very effective. People are becoming dissatisfied with his rule and people jockey for position as the stench of betrayal fills the air of the Empire.

There are plots against the Emperor and Diomedes, who is a swordmaster who is beyond the first blush of youth (to put it kindly)  is charged with the task of trying to unpick a viable plot against the Emperor. Diomedes is, however, a complex man and he is struggling with feelings of unrequited love for a woman who is, and things are getting a little complicated, here, the wife of a good friend, the life of whom is at risk.

The novel is extremely well-written and it takes you into the action from the first paragraph and will be a good read for people who like their fantasy to be heavy on factual possibilities and doing away with flying dragons and the like.

It's published by Matador at £9.99 and will make a great holiday read.