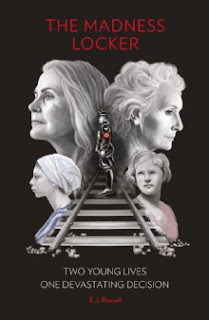 The Madness Locker is a debut novel from the pen of E. J. Russell.

It's Christmas Day, 1986 and a corpse has been discovered in a wheelie bin in the Eastern suburbs of Sydney, Australia.

The remains are those of a widow who was 70 years of age.

The police swiftly go into action and launch a detailed and very intensive investigation, but despite their very best efforts, they fail to identify any potential suspects or a potential motive for the killing.

They find no clues, no forensic evidence and so reluctantly the police decide to file it as a cold case.

However, perhaps the police wee looking in the wrong places for clues to the murder?

E. J. Russell looks back to a time when, fifty years previously, the whole world had been in flames as innocent people were sent to places like Auschwitz merely because the Nazi Third Reich either did not like their political vies, their mental incapacity, their race or just because they were in the wrong place at the wrong time.

A young girl is arrested along with her family, they are forced to travel to Auschwitz on a three-day journey in a railway wagon. On arrival she is separated from her parents who she never sees again.

After years of suffering forced hard labour, near starvation and punishments "just because" the Russian army sweeps into Poland and she, along with the other pitiful survivors of Auschwitz are liberated.

After she recovers she believes that she knows who she blames for the loss of her parents and the years of abuse she suffered at the hands of her tormentors.

She sets out on a journey to track them down and to bring them to some form of justice.

Is there a link between her search for retributive justice and the corpse that was found in the wheelie bin?

If so, how did her nemesis track her down? And how and why did she have to die? How was she killed?

The beginning of this fictionalised account is a real event that took place in 2006 when a corpse was discovered in similar circumstances to those described in this novel.

It's a compelling and exciting thriller and worth every penny of the £9.99 price set by the publisher, Matador.

It will make a very good beach companion for the holidaymaking reader.
Posted by Martin S at 12:45