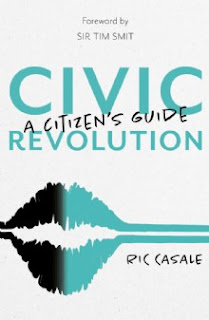 Civic Revolution is a book from "serial entrepreneur" Ric Casal3e.

He has an optimistic view of the powers of ordinary citizens which he outlines in this, his debut book.

He points out that cities are the places that have the greatest influence over life on our planet.

Cities are, he claims, the biggest causes of global warming and pollution. But he indicates that our cities are also the potential solution to these very problems.

Until now, however, he felt that what was missing was a citizen's guide to how to effect change and turn the city where you live into "the seat of the solution."

Which is why he has written this book. You'll learn about climate change, public affluence, biodiversity, empowerment and more besides.

The book has a forward by Sir Tim Smit.