A Spot of Vengeance 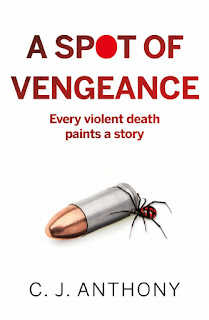 A Spot of Vengeance is a new novel from author C. J.Anthony It's his exciting spy thriller debut.

Danny Swift is a former Army Intelligence operative. But he's now put all his intelligence work behind him as he is an aspiring artist.

He meets an art dealer, Hafiz De Mercurio who gives him promises of assistance to launch his fledgling career as an artist.

But there's more to De Mercurio than is apparent. It seems that behind the veneer of an art dealer, lurks something sinister.

And so it is that the British Secret Service reaches out to Danny to recruit him to covertly keep track of De Mercurio.

The Secret Service believe that a major terrorist outrage is being planned, something worse than ever before and they want to stop this from happening. As does Danny, who reluctantly re-enters the world of subterfuge, secrecy and deception that he thought he'd left behind.

They are aware that the key to the whole matter lies within a cypher that is hidden somewhere within works of art. And it's Danny's task to find out what this cypher is and why it is hidden within artworks that are on display in eleven art galleries all over the world.

It's a thriller of a book from the first page right to the last.