What's THAT Doing There? 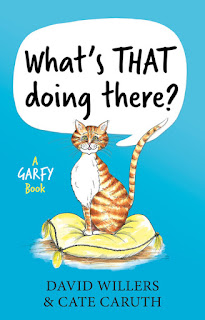 This is the true (or trueish) story of a very special and utterly elegant ginger cat known as Garfy, but officially given the more splendid name of Garfield Abercrombie Reginald Fergusson.

Garfy is pretty much the King Cat of all he surveys, but especially the meadow over the road from the house he shares with his manservant called David.

The meadow had, when Garfy was a kitten, been the location of a factory, but it had long ago been knocked down and nature had taken over the site, giving Garfy his own personal meadow.

Until some humans (how rude of them!) decided to build Paterson's Superstore on Garfy's meadow.

Garfy sized up the situation and realised that as he could not beat them (climbing up onto a JCB had only slowed matters down by a few brief moments) he would join them.

He decided to claim the store for his very own self and this is what he did. In fact, he was their first customer and quickly became a celebrity cat in the city of Ely, in Cambridgeshire.

But it wasn't all catnip, treats and naps for Garfy. The manager wasn't too keen on having a resident top cat at his store and there was the somewhat unpleasant incident with a tough looking black cat called Tyson who was somewhat of a usurper and thought that Garfy's full name was Carpark Abnormal Regient Furball. And who had decided to insert himself in Garfy's very own shop and to take it over!

But Tyson was a vicious street fighting cat. Could Garfy survive against the bigger, tougher and younger cat?

After he was able to see off Tyson the thuggish cat, Garfy developed a love of going on trips in cars and there was also the matter of the portrait of Garfy by a famous artist. But would success spoil Garfy?

This is an utterly charming fictionalised account of the life of Garfy, Ely's most famous cat, who has a Facebook following of in excess of 5,000 people from all over Ely and the rest of the world.

He has had his portrait painted by artist Rob Martin, has his own special seat at a petrol station, often hangs out on the sofa at Virgin Travel near to the local Sainsbury's.

The illustrations in the book are by artist Ginny Phillips, the book is published by The Book Guild at £8.99.