Dorris Morris and the invasion of the neighbours

Doris Morris and the invasion of the neighbours is a truly wonderful book for children (and the adults in their life, too!) from author Janet Kelly.

It playfully and enchantingly tells the story of Doris who is an elderly cat who lives with the Morris family.

Sadly for Doris whenever her family goes out her peaceful existence is shattered by the visits of Gangsta Cat and Lizzie.

These two scurrilous villains bully poor Doris and make her life a misery by stealing her food, bullying her and making a terrible mess.

Unfortunately poor doris gets the blame for their wicked ways.

However, Amy and Ted are not as gullible as their parents and they soon cotton on to what is happening, they realise who is really causing the problems so they decide to set a trap for the two miscreant moggies!

Their determination saves the day as their mother realises that it was not Doris who was being a naughty cat, after all!

This is a large format hardback book and it is sumptuously illustrated and is ideal for children from 4 to 6, though older children and adults will find something to love in this lively and thought-provoking book.

It will be published on 28 May and should be available for preorder at the That's Books and Entertainment bookshop, here https://goo.gl/tn8Kiq. 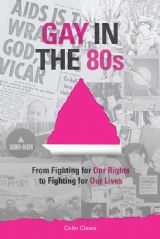 Gay in the 80s is a debut non-fiction book for author Colin Clews.

It is an historical and non-fiction account of what it was like to be gay in the 1980s in the UK, Australia and the USA.

It covers contentious issues such as Section 28 in the UK, the resurgence and growth of the New Right in the USA and the fact, astonishing though it might appear from the year 2012, that throughout a number of the States in the Commonwealth of Australia, Homosexuality was still illegal.

The 1980s was truly a dramatic decade for members of the gay community and what has now become known as the LGBT community.

There was the fight for the recognition of the rights of gay people and also the looming problem of AIDS which was, unfairly, stigmatised as a "gay plague."

As well as touching on these and similar issues, the book looks at the politicisation of the LGBT community and their involvement in a number of quite disparate issues such as the miner's strike, issues of policing, freedom of speech and so on.

The book will be a worthy addition to the bookshelves of people who are interested in gay history, the history of a decade that was a contentious and troubled time for a variety of reasons.

It is published by Matador at a very reasonable £14.99 and it will be available from the That's Books and Entertainment bookshop which you can find here https://goo.gl/tn8Kiq.

Colin Clews is to be congratulated on a book that is both academically sound but also eminently readable.