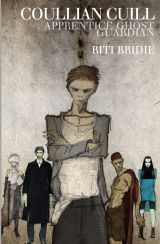 Sethallis was an undertaker. Which was a perfect disguise for what he really was, a Grey Ghost who just loved to kill a Ghost Guardian and take just a little trophy from his victim.

The existence of Grey Ghosts like Sethellis with their propensity to murder newly selected Apprentice Ghost Guardians was perhaps something that they should have told the first boy Ghost Guardian, Coullian Cuill about. Given him  fair warning, you might say.

But they didn't, so poor Coullian has not only to contend with learning about what a Ghost Guardian should do, he had the honorous task of trying to keep one step ahead of Sethallis and his assistant and to keep himself from being turned into a ghost!

Coullian manages to gain the assistance of two of his good mates, Rawsy and Killane to help him be a sworn protector of good ghosts.

However, come All Souls' Night and everything seems to become a little Thriller-like, with fiendish ghosts and ghouls rising from their varied graves.

So, what's a boy Apprentice Ghost Guardian to do? Battle against the fiends and to try to remain alive. Which is a tall order.

If you like scary, well-written stories, this is one for you. It's published by Matador at £7.99 and can be bought here https://goo.gl/wdCFDG.

To  learn more visit www.ritibridie.com.
Posted by Martin S at 16:47 No comments:

The Secret of the Wooden Chest 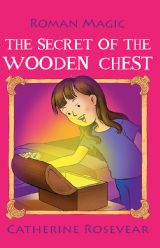 The Secret of the Wooden Chest is a debut novel from author Catherine Rosevear.

It is set in an environment that is very familiar to Catherine, a nursing home, as she has psent much of her professional life working in nursing homes.

Hannah lives in a small flat on the top floor of a nursing home. She is an only child and shares the flat with her mother who is the matron of the nursing home and her father who does all the maintenance jobs at the nursing home. "Anything but electrics" as he says.

Hannah loves to make friends with the elderly people who live at the home and she is excited by the arrival of a new resident in the middle of the night, after her own house was badly damaged by fire.

This is an Italian lady called Mr Oberto. At first Mrs Oberto seems grumpy, but after a while, she and Hannah become good friends.

But even though they become friends, Hannan just cannot get Mrs Oberto to reveal the secret that is hidden within an old wooden chest that she keeps on the table beside her bed.

One day, Mrs Oberto becomes dangerously ill and as a result, she is hospitalised. She then reveals that she needs the assistance of Hannah to open the old wooden chest.

What is hidden with the mysterious chest?

Then, Hannah's amazing adventure really takes off! She meets with a girl from ancient Roman times and learns that if she really wants to help Mrs Oberto to recover from her debilitating stroke, she must seek out the help of a Roman god!

Can Hannah help Mrs Oberto? Will Mrs Oberto get better?

This is an extremely well-written book and it is heartening to know that it is the first part of a series of stories about Hannah and Mrs Oberto.

It is an ideal book for children of all ages and their parents and grandparents, too. It will make a super Christmas present.

Only Human is a riveting autobiographical story of what it is like to be a 21st century cop.

Gemma Hines shares what it is really like to be a member of a modern, high tech police force in Britain.

Gemma's start in life was not the easiest, she was stuck in the middle of an ugly custody battle between her warring parents for six very long years.

This brought about a period of purposeless and rebellion, but she was able to turn her life round. She became a personal trainer and at age 18, she chose to serve her community as a Special Constable.

After seeing what being a police officer was really like she decided that she wanted to become a regular officer, so she applied to join the Greater Manchester Police.

Even though she had already been accepted as a Special Constable the process of application and acceptance was still a protracted one and after several months she was accepted as a Police Officer.

Over the next decade she was involved in some fairly major police operations and her book shows what it was like, serving as a female police officer in the early part of the 21st century.

However, Gemma was not a typical police officer, starting out previously as a personal trainer and also becoming a fully trained exponent of martial arts, holding a range of titles in her chosen field of Kick Boxing.

Some of the stories that she tells are humorous, some are horrific, such as rescuing a badly emaciated dog from a flat that was stacked high with rubbish in every room, only to discover that the dog had only survived by feeding on his deceased owner who had died because she had slipped on some of the rubbish in the bedroom and become wedged between the bed and a wardrobe.

There were harrowing tales of suicide, such as a former Macmillan Nurse who, when she developed cancer, decided that she would take her own life and die with dignity.

It was this case that helped Gemma decide to volunteer with dealing with deaths and welfare cases as she wanted to feel as if she could make a difference.

It is published by The Book Guild at £8.99 and can be obtained here https://goo.gl/wdCFDG
Posted by Martin S at 14:52 No comments: