Time Travelling Toby and the Battle of Britain 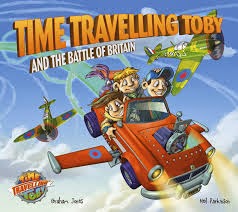 Time Travelling Toby and the Battle of Britain is the story of Toby. Toby is, apparently, a fairly normal boy. Unremarkable, one might say.

Except for the fact that Toby has an amazing secret. He has a time machine, cunningly disguised as a sports car!

The book is written by Graham Jones (in rhyme, but don't worry, it's really coolly done!) and stunningly illustrated by Neil Parkinson.

The book tells of the amazing adventures Toby and his brothers have when they fly back in time to the Second World War, the time of the famed Battle of Britain.

They get attacked by a Stuka dive bomber, help warn Fighter Command of the German attack and still get back in time for their tea!

The story is not too long, so is ideal for parents to read to their children and everyone will love the detailed blueprints of the designs for the time car.

The book also contains factually accurate information about the Battle of Britain.

At £6.99 it's money well spent. Learn more at www.timetravellingtoby.com.
Posted by Martin S at 01:09 No comments: