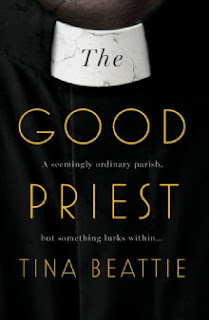 The Good Priest is a debut novel from author Tina Beattie.

Father John is parish priest of Our Lady of Sorrows in Westonville.

He lives an orderly and peaceful life, but all of this is virtually destroyed when, on one Ash Wednesday, a stranger walkies into the church, enters the confessional box.

What the stranger confesses to Father John is so horrific that it shatters his life.

Old memories of abuse from his past bubble up to the surface and he realises that what he thought to have been forgiven and forgotten many years since, might actually still be powerful, dark forces.

Murders are being committed. Could these be linked to the stranger's appearances in the confessional box?

And is the man really a stranger? Or could he be the cardinal who had abused John whilst he had been in Rome, many years ago?

But surely the cardinal had died during the horrendous 9/11 attacks? But what if he hadn't? What if he was here, now, tormenting Father John in his own church?

Or is he a ghostly apparition, like the young girl, Sarah, who has been a protecting presence in his life? Or is he something more sinister? Something far more evil and insidious?

This is a stunning debut novel. I think that Tina Beattie will be a potent force to reckon with in the field of detective and mystery and thriller fiction.