The Journals of a Victorian Traveller 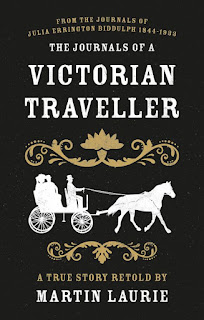 In 1942 a house in Canterbury, Kent, fell victim to one of the infamous Baedeker Raids, during which the Luftwaffe used the travel guidebooks of Karl Baedeker to target historic British towns such as Bath, Exeter, Norwich, York and Canterbury.

This house, however, was different from the other houses bombed during these raids. For in the ruins of the house were discovered the  travel journals of Julia Errington Biddulph which were removed to a place of safety.

The travel journals in The Journals of a Victorian Traveller tell the stories of the travels of Julia during the latter decades of the 19th century.

Prepared and retold by Martin Laurie this book is a stirring and romantic story of the world of the latter part of the 19th century.

Her first journey to India took seven weeks. But by the latter part of the period covered (30 years later) the same journey took just under 14 days.

She met royalty, generals and other notable person and they suffer the vicissitudes of weather by turns monstrously hot or monstrously cold.

She married Colonel John Bidulph in April 1882. He was, we learn, the author of a number of books some on military matters, although he also wrote on other topics. He was also a naturalist and sent specimens to the British Museum.

Laurie points out that, over time, Julia's journals show that she matured from a rather timid girl at the time of her fist visit to India into a mature and confident woman.

The book is well-illustrated with photographs from the family album and I feel it is a must read book for those interested in history and/or 19th century travelogues.

It is published by The Book Guild at £9.99 in paperback.