Wildfire, an entertaining book for children of all ages 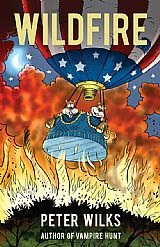 Lemuel Squirrel lives the life of a hermit in his home deep within the Oregon Forest.

He has a reputation as being a harmless, lovable eccentric old Squirrel.

But Lemuel has a secret, in reality the life he leads is nothing more than an elaborate and cunningly contrived cover story.

For even those who are nearest and dearest to him are completely oblivious to the fact that the real Lemuel Squirrel is a top rated, yet maverick, secret agent!

However, unbeknown to Lemuel, dark forces are at work that will soon shatter the idyllic life of not only himself but those around him, also.

His cover has been blown by shadowy and potentially dangerous enemy spies, who are watching and waiting for the chance to obtain a treasure map that they have been briefed about, that they are sure is in the possession of Lemuel Squirrel!

Amidst all of the cloak and dagger machinations of his formidable enemies, disaster strikes the Oregon Forest when lightening-induced wildfires rip through the trees and the glades.

Lemuel takes upon himself the onerous task for not only saving his own life but that of his nephew but of his loyal friends, too.

In an old fashioned example of daring-do that would have made even James Bond gasp with admiration, he save everyone by using his secret airship to whisk them to safety.

But is Lemuel really whisking them to safety, or is he inadvertently moving them into even greater danger as the deadly and ruthless enemy agents attempt to thwart Secret Agent Lemuel Squirrel's latest top secret assignment?

But who is directing the enemy secret agents? And what is their evil and nefarious purpose?

It's an intelligent a very good read, and at £8.99 paperback it will make an excellent present for the avid young reader and also for their parents and grandparents, too.

It is also available as a Kindle version.
Posted by Martin S at 12:25 No comments:

New title for this blog

You will have noticed that That's Books is now called That's books and Entertainment.

This is because it has bene decided to consolidate two blogs, That's Books and That's Entertainment.

This blog will still carry book news and reviews but it will also now carry news about DVDs, TV programmes, music and the like.

We hope you will like the new blog.
Posted by Martin S at 00:36 No comments: