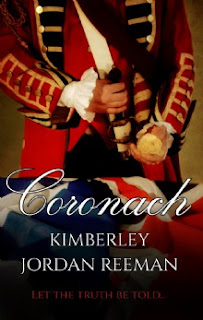 Coronach is an novel of over 782 pages in length.

It is written by Kimberley Jordan Reeman and it's an epic tale of love, heartache, loss war and death set against tragic backdrop of the doomed Jacobite Rebellion.

It's July in 1746, and the Scotish Highlands are suffering under the occupation of an invading army. Atrocities are committed and the cost will be felt through generation after generation to come.

Even so, there are individual acts of compassion and a battle-weary English soldier by the name of Mordaunt saves an infant who will eventually become his heiress and his obsession.

On what remains of his ruined estate, a shocked Franco-Scottish Laird, Earl Stirling offers refuge to a boy who had been damaged by a dreadful horror.

These apparently separate lives are bound together by fate as their destiny plays out against the turbulent and violent times of the 18th century.

It's published by Matador at £13.99 and will be most welcomed by fans for historical romances.
Posted by Martin S at 16:52