Me? I Kill People 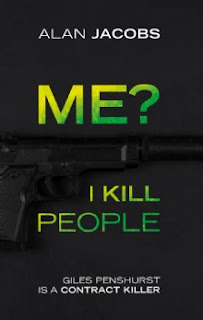 Me? I Kill People is a debut crime novel from author Alan Jacobs.

An apparently harmless computer nerd Giles had become a contract killer almost by accident. He found that he had an aptitude for murder but tried to ensure that he only ever killed people who deserved to die.

Although Giles is very careful the police realise that there is a contract killer on the lose and they are making every effort to find out who the killer is and to trap him and arrest him. Something that Giles just does want to happen to him for obvious reasons.

There's one particular police officer, Hazel Frazer, who is hot on his trail.

Matters become complicated when Hazel discovers his identity, but falls in love with him.

Giles manages to elude the police and flees to Brazil to hopefully avoid extradition.

Will Hazel's love for Giles prove her undoing? Will she be able to perform her duty in bringing Giles to justice or will she falter due to the call of her heart?

Or will Giles' life as a computer nerd and contract killer all come crashing down around his unprotected head?

This is a complex yet highly enjoyable thriller.

It's priced at a very reasonable £7.99 and is published by Matador. It'll be packed in many suitcases this summer, I think.
Posted by Martin S at 00:44