Monkeying Around at Sea 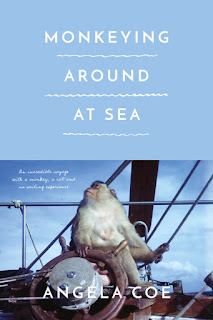 Monkeying Around at Sea is an amazing travelogue written by Angela Coe, which records her two-year voyage from Singapore all the way to Spain in a ferro cement boat (yes, they make boats out of cement) called Sandpiper.

Angela her husband Bob, Pixie (a monkey) and Bob-tail, Angela's cat, embarked on an amazing journey. They had no sailing experience at all, it must be acknowledged. Even though Bob was a master mariner.

Things were not fated to go particularly well from the very beginning. Pixie was lost overboard and the captain (her husband Bob) managed to require hospitalisation with a dislocated shoulder. However, Pixie was returned to the ship, a disaster that was averted, thankfully, as they had thought they'd lost her.

When the captain was fit enough to return they, eventually, set sail. And ran into a sand bank.

They aimed to sail all the way back to England, plans to sail round the Cape somehow became a rather dangerous quest to brave the Red Sea.

Life on the Sandpiper was never dull and often involved a little bit of peril. Although the fear of a potentially exploding pressure cooker proved to be groundless, ensuring the safety of the pets and human crew took up a good deal of time and tricky matters such as a leaking chemical toilet, how to dispose of waste whilst at sea and a variety of heath issues and the like really kept them on their toes.

The book is copiously illustrated with a number of gorgeous colour photographs from the journey and their ports of call, plus some line drawing maps, too.

Did they ever make it to England? Purchase the book for £11.99 and find out!

The book is published by The Book Guild.
Posted by Martin S at 01:59