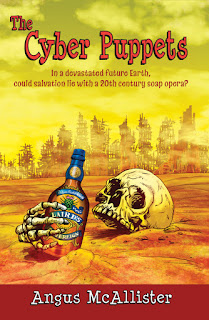 The Cyber Puppets is a science fiction novel from author Angus McAllister.

Scott Maxwell's life is strange. Weird, even. His wife is unfaithful, multiple times, his brother-in-law William seems to take scheming and plotting to almost ridiculous extremes, and his other brother-in-law Roddy, let's just say that his alcohol consumption is stupendous.

However, perhaps that is because Scott has married into the Laird family, one of the biggest distiller of Scotch in the entire world?

But things are starting to get even stranger. How come Scott is the only one who notices that his father-in-law has been replaced by a totally different person?

And why does Scott seem unaffected by his wife's cheating and her pregnancy? How come he has no free will? What is the cause of his memory lapses?

And what, exactly, is Mr Ramanuki up to? And Bruckner. Where does he fit in?

With all the machinations, the plotting, the twists and the outrageous behaviour, the miraculous recoveries of various family members, you'd almost think that it was a soap opera, rather than real life!

Wait a moment... what if? What if Scott really was a character in a soap opera?

(NOTE: The appearance of Professor Chandler in chapter 18 and his lecture on 20th century television programmes and especially soap opera was very well realised and took me back to media and cultural studies lectures that I have attended. This means either that Angus McAllister has a very vivid imagination or has sat through more than his fair share of such lectures!)

Scott must come to terms with the fact that not only has he being living the life of a man trapped in a false reality, that he is, in reality, living in a time 100 years beyond where he thought he was, a time when the environment had become devastated by man's stupidity.

And then Scott discovers a cataclysmic secret that really blows his mind.

But what would happen in a soap opera if the characters began to go off script? And just who, exactly, is writing the script?

In truth this plot is not unique, it has been done several times before, but not always with the panache and wit of Angus McAllister, who really is a great find as an author.

It's published by Matador at a very reasonable £8.99 in paperback and is also available as an e book.

I have to confess that I am a fan of retired professor Angus McAllister's works, including his novel Close Quarters.

Both of which are available from the That's Books book shop https://amzn.to/2kB1tO7.