You Can't, You Won't A Life of Unarmed Combat 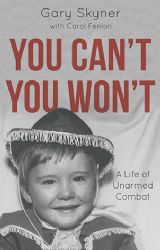 You Can't, You Won't, a Life of Unarmed Combat is a stunning memoir from Liverpudlian comedian Gary Skyner. Written with the assistance of Carol Fenlon, Gary tells his life story as one of the Thalidomide children.

Born in 1959 with a range of severe physical disabilities after his mother was prescribed the drug Thalidomide to calm her morning sickness when she was pregnant with Gary.

As one of the first Thalidomide children born within the UK, his life was both challenging and difficult because the drug also impaired his physical development. Indeed medical opinion varied from: "He'll not live, long" to "He'll never amount to much."

However, Gary is living proof that belies both of those medical opinions and Gary just goes to prove that there's nothing a person cannot achieve if they set their mind to it.

In his autobiography Gary shows how he was able to defy all the odds to become a successful and very popular comedian and motivational speaker.

It reveals the traumas caused by the breakdown of the marriage of his parents and of his somewhat difficult relationship with his father. Gary remains convinced that this was as the result of the strains and tribulations of raising a disabled child in 1960s Toxteth.

Gary became a passionate campaigner for the rights of Thalidomide victims to receive proper recompense and recognition for the problems that Thalidomide had caused them and their families.

This is a truly heartwarming book and it is published by Matador at £8.99 and will make a great Christmas gift for lovers of biographies.