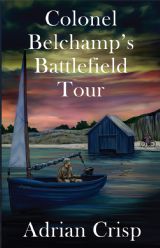 Colonel Belchamp's Battlefield Tour is a moving piece of fiction which does start from some historical wartime fact.

In May 1940 Dunkirk was not the only place to see a strong, but ultimately hopeless, defensive action. For there was also the defence of the port town of Calais, often overlooked by the history books.

Author Adrian Crisp has used the defence of Calais as the starting point for his novel.

The book begins 24 years later, in May 1964. Former soldier James Butland is devastated by the recent death of his young son.

He decided that he would return to France to visit the battlefields where, as a young man of 18 years of age, he took part in the defence of Calais.

Whilst there he takes stock of his life, looking back over the lead up to the Second World War, the war years and the years following that dreadful conflict.

He had been on the point of going to study at Oxford University, but like so many members of his generation his plans were spiked by the advent of war, when he becomes a young soldier.

He is wounded in the conflict and is hidden from the invading Germans by a young medical student named Agnes. Following a brief love affair she is able to help him return to England.

After his return to full health James is posted to Tunisia where, during vicious fighting, he is wounded again, this time so severely that his has to be discharged from active service.

Weary from fighting and killing James decides that he would rather be helping people and saving lives, so he opts for a career in medicine and trains as a Doctor.

James' career as a man of medicine flourishes, but his life is shattered when his son who is none years of age is killed in a road accident.

Whilst he is visiting France he decides to see if he can find Agnes. He does so, but is shocked to learn that she bore him a child.

This news brings a crisis of conscience to James. What should he do? How should he react to this utterly unexpected news?

This is a very thoughtful novel and it is to be hoped that Adrian Crisp will have a long career as a novelist ahead of him.

The book is published by Matador at £7.99 and can be purchased here https://goo.gl/wdCFDG.
Posted by Martin S at 13:25