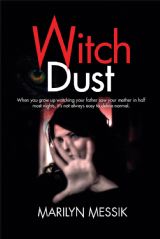 In Witch Dust we meet Adam and Ophelia, who are the darlings of the entertainment world. Appearances on the Graham Norton Show, Christmas specials and magazine and newspaper features, they are known as Mr and Mrs Magic.

Page 1 contains one of the best lines I have read in a novel: "I've just killed your father."

The story relates how, when the marriage and professional partnership of Mr and Mrs Magic disappears, not in a puff of stage smoke, but with a cloud of adultery ("a chorus girl too far") Sandra suddenly finds a life she never knew she had or that she actually wanted.

From being a part of a family of three, she suddenly finds herself surrounded by a whole passel of family members she never knew existed.

There's the tottering hotel business, a documentary, a hanged maid, ghosts, psychics, journalists and then the situation slides from farce into a potentially very dark tragedy indeed.

And Sandra finds that she isn't fighting to save the income of her family, she's actually fighting for their lives.

And what did happen to the lion that vanished in mid pounce?

This is an enjoyable and  fast-paced novel from the pen of published author and journalist Marilyn Messik.

It's published by Matador at £7.99 and can be obtained here https://goo.gl/wdCFDG.