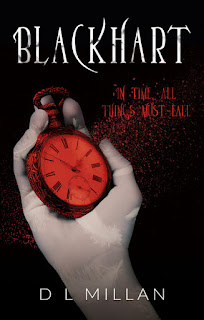 Blackhart is a novel from D L Millan.

In the year 1822 Lord Blackhart is thrilling his young grandsons with the stories of a mystical curse that has been placed upon their family. It is the story of the Black Dove.

But the threat will only come good should the Blackhart line die out.

The story then moves to the present day when a teenage girl by the name of Callie follows a mysterious stranger and finds herself in a totally different world.

A battle, using the powers of magic, breaks out between the mysterious stranger (who is called Alex) and James Blackhart and his cohorts.

In the nick of time reinforcements arrive in the form of the Doves, who are Alexis' previously estranged sisters.

The Blackharts flee to their home in the early 19th century.

It becomes clear that the two time streams have become linked due a a Blackhart portal, which is an ability unique to the family, which gives them the ability to travel backward and forward in time.

James Blackhart's niece lives with the sisters and sahe discovers evidence that Callie's late father was a creator of portals.

Callie and Alexis meet, once again, under extremely trying circumstances and a secret from Callie's life is revealed. A secret that has haunted her for years.

Callie is drawn into a dangerous world of time travel and magic, where she learns about ancient secrets and the curse of the Black Dove.

This book is published by The Book Guild at £9.49 and can be purchased here
https://goo.gl/wdCFDG.