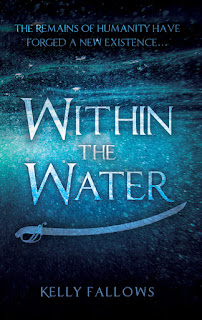 Within the Water is a science fiction fantasy adventure novel from Kelly Fallows.

Captain Benjamin Daniels was once a leading light in the Republic's Naval Service, but that was in his past. Now he is a disgraced former officer, a pirate.

He becomes the leader of a group of fellow exiles. They are at the mercies of not only the Republic but also the Guild, a criminal organisation.

Captain Daniels and his crew must employ their varied skills to work for the Guild, whilst always trying to remain out of the clutches of the ruthless troops of the Republic.

Trapped between these two dangerous factions, he must take his crew on a very dangerous mission that will risk their lives as they battle against all sides as they try to work to save the fractured remnants of society already damaged by the wars that left the world a water-covered ruin.

The stakes are very high, for if they fail, the future of all citizens will be at risk.

This is an exciting and adventurous debut novel and Kelly Fallows is a name to keep an eye open for.

The book is published by Matador and costs £7.99