The Sorceress and the Postgraduate 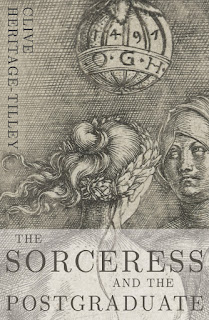 The Sorceress and the Postgraduate is a new novel from Clive Heritage-Tilley that combines historical fact with fantasy and magic.

In 1497 Albrecht Durer produces his famed Four Witches engraving. However, in truth there were five women, not four, all of whom were sorceresses. They had all been condemned to death, but it was decided that the youngest of the five, an English girl called Constance, should not die and the other sorceresses cast a spell upon her to suspend her in time.

Many centuries later an Oxford University student decides that he is going to steal an interesting object from the Pitt Rivers Museum, with the aim of furthering his studies.

However, what happens next plunges him into an amazing world where everything he thinks he knows is probably wrong and he discovers that magic is something that is very, very real.

He finds out that his search for historical facts are replaced by a need to search for secrets that have been locked away for many centuries.

Can he and his new assistant survive and thrive in this stunning new world? Read this book to learn more!