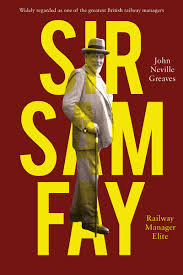 Sir Sam Fay Railway Manager Elite This is the first ever full-length biography of one of the greatest ever rail managers of all time.

Sir Sam Fay's start in life was not, as one might have expected, in an industrial setting. He was born in rural Hampshire in 1856.

He started his working life with the London and South Western Railway. From humble, clerkly status, he swiftly rose through the ranks, becoming the General Manager of the new Manchester to London Great Central Railway in 1902.

During the Great War from 1916 to 1919. Sir Sam Fay had the onerous task of managing not only the rail system of the UK, but also roads and inland waterways.

He was responsible for the movement and transportation of troops, military supplies and ammunition. And also for ensuring that wounded troops were brought back to the UK for treatment and convalescent care.

He became involved with government ministers, senior politicians, top civil servants and generals, all of whom became reliant on him for his transportational expertise.

The book contains many interesting facts about Sir Sam Fay including that he was a well-read young man, that even after his Knighthood he still preferred to be known as Sam and that he was often mistaken, by his mode of speech, for a gentleman from America.

He explained this by pointing out that he spoke with a Hampshire accent and that the American accent was based on the Hampshire dialect which had travelled to America with early migrants from Poole Harbour and Buckler's Hard.

In this biography John Neville Greaves has produced a most excellent biography of this eminent railway manager, which is a must have book for all railway enthusiasts and students of social history.

It is also conspicuously illustrated throughout and is an absolute bargain at £12.99, published by The Book Guild.

Looking for an ideal Christmas present for the railway enthusiast in your life? This is it!
Posted by Martin S at 15:59