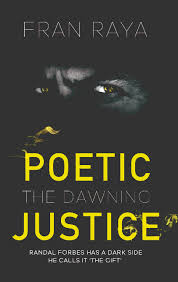 Poetic Justice The Dawning is a debut thriller novel from Fran Raya.

But he is not like a fictional superhero. Because he is not governed by some superhero creed for good. Forbes uses his unique powers to destroy those he considers to be his enemies without any feelings of guilt or concern.

This is the first novel in a new series that follows his life from birth until his late teens.

He uses his psychic abilities to control his unaware family, coercing him to become his loyal followers.

He employs his powers to ensure that he gets what he wants. If he considers that someone is standing against him or getting in his way he will remove them or maim them.

Who would be able to dare stand against him? Someone with similar levels of psychic powers? But is there anyone in the whole world who could challenge him?

This book is published by The Book Guild at £8.99.