Rift Wars The Entity Within 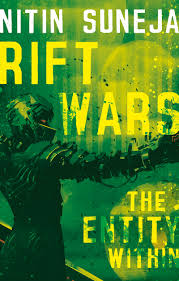 Rift Wars the Entity Within is a science fiction debut novel from Nitin Suneja which is aimed at a young adult audience.

It tells the stroy of Jon Farrell who, at the age of 15, has to flee the ruins of the Roman catacombs. Unfortunately for Jon and his parents, his parents did not survive.

When he reaches the surface he discovers that the entire ancient cit of Rome, which he was visiting with his parents, has been devastated.

Eventually Jon finds his way to a military base and finds to his horror that the attack has been planet-wide and that only a small fraction of the human race was able to survive the attack.

As Jon discovers more about the attack from a highly technologically advanced alien race, he realises that he must do what he can to fight against the enemy.

Those in charge feel it is likely that another attack is imminent. However, is it possible that, by providing humanity with a common enemy, that the aliens have proved themselves vulnerable by their blunder?

Earth is not the only planet that was attacked by the enemy and other races visit the Earth in order to work together to provide a common defence against the attackers.

Humanity receives body armour, amazing weaponry and medical drugs to provide longer lives. And they take up the fight with the common enemy and become involved with the Rift Wars.

It's an extremely well written novel which is modern day Space Opera at its best.