The Egg and the Family 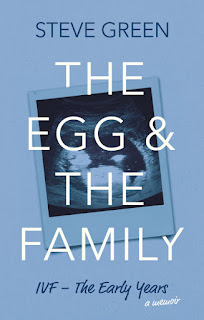 The Egg and the Family is a remarkable first-hand account by Steve Green, who shares the pioneering early days of IVF treatment.

Steve Green, PhD, is a Clinical Embryologist who is widely considered as being one of the founders of  modern embryology.

In his book he charts his own personal journey of working at the leading edge of IVF research.

From life as a homeless teenager in Grimsby to a leading IVF pioneer, Steve's story is a truly fascinating one.

Despised by his father who threw him out of the family home at 16 for the crime of wanting to better himself by seeking an education, he had a difficult start, but Steve was determined that he would obtain an education and escape the typical working class life that was the fate of his contemporaries.

And so he did, becoming a laboratory technician and working hard to establish himself as a leading authority on IVF, and the author of in excess of 50 academic papers on the subject.

He helped many thousands of people become parents, but this was not without costs to his person life.

It is an interesting, compelling and highly personal account of what it was like to be an IVF pioneer.

The book really needs to be on the shelf of any MD who deals with infertile couples and any student of embryology.