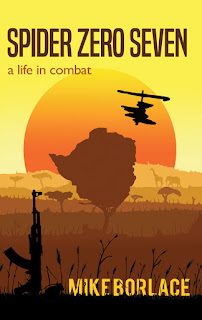 Spider Zero Seven is Mike Borlace's own very personal memoirs of life as a combat helicopter pilor with the Rhodesian Defence Force during that country's civil war during the 1970s.

Although small, the RDF was a highly professional army and, as he points out, helicopters played a very important role in the operations of the RDF whilst fighting against Communist backed guerrilla forces such as those of Robert Mugabe.

In 1974 he was recruited to join the Rhodesian Air Force and although he was initially expected to pilot Hawker Hunter planes, his experience as a combat helicopter pilot saw him moved over to 7 (Helicopter) Squadron which was becoming very heavily enmeshed in the war against terrorists, meaning they were desperate for trained helicopter pilots.

He served with  the squadron for exactly 1,096 days, of which a total of 793 were on active combat missions.

327 of these days was as the pilot of helicopter gunships, and a fireforce commander. During which he had 149 enemy contacts. He also undertook many casualty evacuations (casevacs) and also nearly 100 operations involving the Rhodesian SAS, the Selous Scouts and the Rhodesian Light Infantry Commandos on cross-border raids.

He was shot down five times and received wounds twice and was presented with the Silver Cross.

After he left the Rhodesian Air Force in 1978 he joined the crack and top secret Selous Scouts special forces unit.

After being kidnapped whilst working as an undercover operative in Zambia he was subjected to such a brutal regime of torture that the High Court of Zambia was 'horrified' by what he had undergone, so released him, only for the government to immediately re-arrest him.

Eventually he was released and deported to London.

In 1982 he began a new career as a private military adviser to various Western-backed allies, globally. Some of the enemies he helped deal with, such as the Sierra Leone Revolutionary United Front, were committing unspeakable atrocities against children and civilians.

The book is written in a warm and humorous tone, but it pulls no punches whatsoever and is one heck of an action-packed, exciting read.

It really does belong on the bookshelf of any self-respecting student of military history.