Podric Moon and the Corsican Tyrant 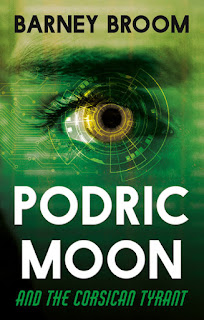 Podric Moon and the Corsican Tyrant is a novel from highly experienced and esteemed screenwriter and director, Barney Broom.

It tells the story of Podric Moon who is not only a computer game playing champion, he is the inventor of the Ultimate Virtual Reality programme.

He and his group of friends roam through the magnificent realms of today and of yesterday, playing games and enjoying a multiplicity of adventures.

In this, the first of the series of novels about Podric Moon, he and his friends take on the might power of Napoleon, the Corsican Tyrant of the title.

However, it's not all fun and adventure for Podric, because he is dealt a terrible and tragic blow when his father, a Wing Commander in the RAF, is killed in what was classified as a "freak accident."

Podric makes friends, and enemies, and he meets up with Archie Light, one of the top game designers in the world, having been knocked down by a hit and run driver outside Archie's house.

And that's only the beginning of this truly amazing novel that is aimed at young adults. Although older adults will also find much to commend this book.