Sons of the Sea 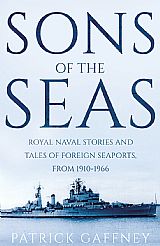 Sons of the Sea is a riveting and compelling book which tells the remarkable story of Harry Cecil Gaffney who had the somewhat dubious distinction of serving at sea through not one but two different world wars.

The subtitle of the book is: "Royal Naval Stories and Tales of Foreign Seaports from 1910 to 1966."

It is written by Patrick Gaffney, the son of Harry Cecil Gaffney. According to Mrs Gaffney whilst her husband was at best a "woeful husband" ha had been a "brilliant sailor."

He discovered that his father had, indeed, been a consummate seaman, a Master Mariner of the old school, who had, as the saying goes, 'been born with salt water in his veins.'

Gaffney senior had served at sea during both the Great War and the Second World War,

It relates how he trained on the HMS Conway, and was subsequently to serve a three-year apprenticeship on a steel-hulled barque by the name of the Inversnaid in 1911.

Upon his return to Britain  he found the country at war, so swiftly joined the Royal Navy, serving on HMS Kinsfaun Castle.

Eventually at the age of 24 he was made the commanding officer of his first ship, Torpedo Boat No 24.

The book is also well illustrated with photographs and it follows Gaffney's senior and junior through their respective naval careers (for Patrick also served in the Royal Navy, but during peacetime) and is a very interesting book, especially for those who have an affinity for the sea and the Royal Navy.

It is published by Matador at £9.99 and is available through the That's Books bookshop, which you will find to the right of this book review, along with many other books and DVDs on naval history and the like.