Glory the Lion Cub and the Dunnos 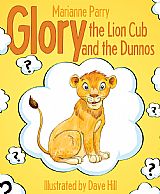 Glory the Lion Cub and the Dunnos is a new book for children by author Marianne Parry and illustrated by Dave Hill.

The tells children the stories of Glory, who is a lion cub, Magnus who is an elephant and Benedict who is a bear.

Glory is a very inquisitive little lion cub. And he wants to know why he can't have patterned fur like the cheetahs, the zebras and the snakes who he knows?

He asks them there names and he is astonished to find out that they all have the same name! How can this be? Why are they all called "Dunno?"

His friend Magnus the young elephant has decided that he wants to pursue a career in medicine and wants to become Doctor Magnus.

Whenever he meets animals who are inured or sickly he attempts to help them as best he can by copying techniques that had observed other animals using, previously.

However, when he sees a young cow elephant, Magnus swiftly abandons his burgeoning career in medicine. He wants to become a grown up male elephant, instead!

Another of Glory's friends is an American Brown Bear, who is called Benedict. Benedict sees a telephone pole and and hears the humming of the wires. He mistakes this humming noise for the buzzing of bees, so quite naturally climbs up the pole in order to find the bees and eat some honey.

But he hears a voice from the wires. And he communicates with... but ot find out who he speaks to, you will have to read this very fun book.

It is published by Matador and is available for £6.99 from the That's Books and Entertainment online book shop, to be found to the right of this review, along with thousands of other books, DVDs, etc.
Posted by Martin S at 23:17