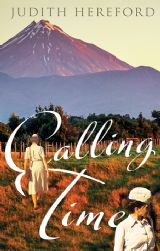 Calling Time is a new and extremely important novel by Judith Hereford.

Judith Hereford witnessed terrible cruelty being meted out to elderly people when she was in his first job as a young woman.

So she feels compelled to bring this issue to the attention of others.

(EDITOR: Recent reports of the jailing of two young women for acts of gross cruelty to elderly women at a carehome mean that, sadly, this book is of special relevance and should be read bearing that in mind.)

The novel draws on her own experiences and touches on a wide variety of highly emotive and equally important concepts regarding the provision of care for the elderly.

It follows the lives of two entirely different people, starting in the New Zealand of the 1950s.

Angela is concerned about the quality of life afforded to the elderly. So he decides to take matters into her own hands and kills four of the patients under her care to "put them out of their misery."

But it all goes wrong when a fifth victim causes questions to be asked into the matter.

As a result, Angela is frightened and decides to resign from her position.

However, Kristine is a model carer who would not dream of murdering those vulnerable elderly people who have been placed in her charge.

But after moving to the UK, Kristine finds that looking after her own mother-in-law is much more difficult than she could have imagined.

Eventually she realises that she cannot cope and takes the decision to have her mother-in-law placed within a nursing home.

The novel makes clever use of a variety of voices -care staff, residents, the matron, etc. to tell the story of how things can, and sadly, do, go so badly wrong with the residential care for the elderly.

This novel is published by Matador at £8.99 and is a very creditable debut novel. It is to be hoped that This is only the first of many novels from Judith Hereford.

It is available for purchase from our bookshop which you will find here >>> https://goo.gl/apr0hq.
Posted by Martin S at 15:06