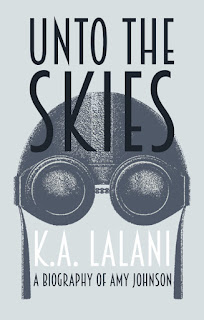 This is a biography of Amy Johnson, the pioneering English aviatrix who was the first femlae pilot to fly, solo, from Britain to Australia.

The daughter of Danish born, but naturalised British, Hull fish merchant, it might seem that Amy was an unlikely candidate for aviation history, but this was exactly what happened.

Author K. A. Lalani has undertaken meticulous research into the life and background of Amy Johnson from her very early life right through to her tragic and early death when he plane she was flying in crashed into the Thames Estuary. Her body was never recovered.

As well as being a pilot, Amy became the first British woman to qualify as a ground engineer, defying those who told her that she would never become a pilot to qualify as a pilot, eventually performing her heroic 1930 solo flight from Britain to Australia.

The sad story of her death by drowning in the Thames Estuary has never properly been explained and her remains were never recovered, even though she had been mere seconds away from being rescued. Indeed, one of the people who attempted to rescue her, died as a result.

The book does a great deal to take the reader into the whole life of Amy Johnson, flying ace and woman and it is very well illustrated with a well-selected range of photographs.

It will be welcomed by lovers of biography, of aviation history and of the history of modern British women and her story remains an inspiration to all, males and females.

It is published by The Book Guild at £9.99 and can be purchased here  https://goo.gl/wdCFDG.