Living to See You 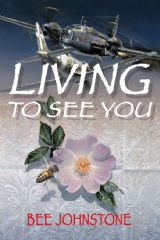 Living to See You is a romantic novel with a very strong foundation of truth.

For in it, author Bee Johnstone tells the story of her own parents and how they met during the dangerous years of World War Two.

Her father was a bomber pilot, became ill with an infection, fell in love with a nurse who was still within her probationary period and survived the depredations and horrors of the Desert War.

This amazing true love wartime story was the basis for Living To See You, Bee Johnstone' debut novel.

The novel relates the long distance courtship between a pilot of Wellington Bombers flying dangerous missions over the skies of Egypt and an equally young probationary nurse who was tending the patients at a fever hospital, in the last days before antibiotics began to help in the fight against infectious diseases.

The story is told through the medium of the love letters that passed between them as each one battles against the problems that they face, enemy action in his case and seriously ill patients in her case.

It is many things, a romantic novel and also a captivating story about the Second World War, detailing the bravery of the Allied pilots who participated in Operation Jostle in 1941, flying in what were described as: "Winston's Wellingtons" a subject which has not been given as much attention as perhaps it deserves.

This is Bee Johnstone's debut novel, let's hope it is the first of many novels from this author.